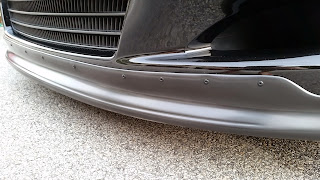 Barely a week into it and the fitment was such a disaster that I had gaping issues with the bumper lip and that obviously made the whole thing suck.

To reiterate what I said in my first post, this was the result of non-guaranteed quality products off ebay from a non-reputable bodykit company. While I don't mind paying for a good one, there aren't many companies out there producing kits for the S191 GS models. At least not to my liking. 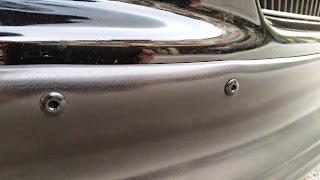 So the screws came off and I had them replaced with black aluminum blind rivets for better fitment. On the hindsight, it did look much better than those shabby self taping screws. Definitely a looker because they don't seem very visible from a distance.

As the gaping occurred mainly along the curved contours over the original bumper, I had the rivets spaced at tighter 3 inch intervals along the sides and left 6 inch intervals in the middle. That would do for the time being to hold everything in perspective.
Labels: DIY Project Gryphon