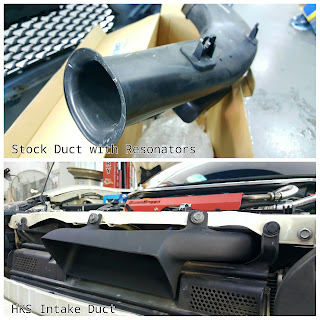 In a bid to improve the passage of air into the FA20, I invested S$250 on the HKS Premium Suction Air Intake Duct after some long contemplation.

Lack of a better word, that's extremely costly for a duct; and we're not talking about a full intake but just the duct or "nostril opening" of the engine. Obviously, this was no "value for money" purchase but in theory, a higher volume of air will make its way into the engine as the HKS duct has a wider opening and no resonators in its path. I trust that the engineers at HKS did lots of tests to achieve this or I would just be another sucker.

Essentially, if I were to pen this like rocket science, this expensive duct would compliment my higher volume SARD Intake and the higher exhaust flow from my HKS Hi-Power Spec-L cat-back would promote some scavenging effect within the cylinders. Coupled with the RS Chip, some Air/Fuel ratio 'tweaks' should do the trick when called for a more optimised Air/Fuel mixture.

To be honest, my first impressions were kind of 'disappointing' because there wasn't any noticeable difference at the lower end power band apart from the slight audible intake 'growl'. The suction sounded marginally more bassy compared to the stock. Just a marginally...

After some boring few minutes on the street, my luck kind of changed.

In no time, I was presented with the highway and with a little more gas, the FA20 pulled very effortlessly from 100km/h to 150km/h and I had to lift my foot off the gas before I got into real trouble. It felt like there was some "warp factor" put into the FA20 for that brief moment, but in a rather linear fashion. To date, I've had this intake for about a month and I must say that it paid itself off at the mid to high rev range. Look, I'm not saying that this is anything like forced induction but there is a noticeable difference at higher speeds.

Inevitably, with power comes an increase in fuel consumption. With joy of having my right foot on the gas, I got noticeably shittier gas mileage of about 0.5~0.75 km/l less over the past month.

Not a bad upgrade but perhaps the price will only be justified if you have a full intake and exhaust system to be optimised.
Labels: Drives Diary Editor's Thoughts Hachi-Roku (ハチロク) HKS Premium Suction Air Intake Duct