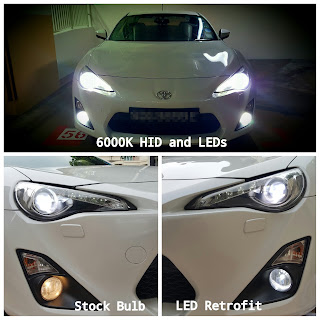 The irony of LED replacement bulbs is that they don't function as well as the stock bulbs. Forget what the internet tells you but if you require true lighting, nothing beats the 'throw' of light from those good old standard halogen. Talk to those in the know driving 4x4s in darkness and they will tell you the same.

While we can go on and on about functionality and usefulness, let's consider the application. On the contrary to how useful those halogens are, I have not been pleased with the way my fog lamps go against my 6000k HIDs.  But because I live in a city, there is no actual use for fog lamps apart from cosmetic reasons. Here, fog lamps are often pegged with LED day running lights to most in terms of function.

Today, there are many variants of bulbs out there and LED replacements are no exception. Looking up my car manual and I discovered that the higher spec GT86 or GTS, employs a pair of PSX24W bulbs for the fog lamps. They are not compatible with the conventional baseline GT86 or BRZ LED replacements available on the web. So buyers beware! Do ensure you get the correct replacement LEDs accordingly. Do not purchase based on the model of your car but rather your bulb type!

So I managed to get my hands on a pair of 6000k PSX24W LEDs from Ali Express. These China made LEDs were sold as "Direct PSX24W replacements" and were direct "plug and play." At least that's what the Chinese manufacturers claim. They also claimed that the LEDs were from CREE (not too convinced for the mere USD14.23 price tag including international shipping but whatever... And it comes with a projector lens for the front too so no complains). With a 24W rating (like the stock bulb), I am not expecting to have any over-current issues. 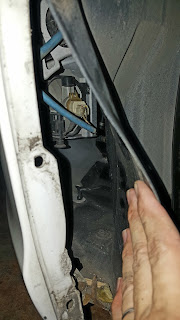 Two weeks was all it took and the LEDs came by mail from somewhere in mainland China relatively quick and well packed. Off came a few plastic clips and the rear of the fog lamps were exposed behind the fender linings.

As expected from my personal experience, nothing claimed by these Chinese sellers are ever accurate. Usually, some "fine tuning" would be involved and this depends if you are up for the challenge. And because the products are priced affordably, you got to work a little to get them to work. Like any intimate relationship, this little project proved to be a two way street. If you are married with kids, on a budget and do not mind getting your hands dirty, this article is dedicated to you!

Now here's the first hurdle. The so called "direct fit" PSX24W sockets were horse shit. Comparing the LEDs to the original bulbs from Philips proved that the plastic tabs around and within the sockets were kind of laterally inverted in design and that wouldn't enable the clips to fit or latch. With a little compare and contrast, I concluded that I would have to remove those tabs and that was exactly what I did to enable the LEDs to fit into the fog lamp sockets. 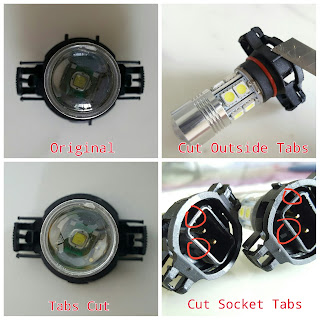 Now, I am not sure why but these Chinese manufacturers often produce goods this way. Maybe it was for copyright reasons or whatever but seriously no surprise.

While the installation wasn't exactly a walk in the park, the cutting of the tabs were cardinal.

After some struggle with the fitment (the plastic latches didn't exactly clip very well for one of my lamps) everything went relatively well and I got the LEDs installed.

Thus far, it had been about a month into its useful life and I had no issues with them in rain or shine. The LEDs complimented my HIDs and as you can see from the first photo, the colour turned out relatively well matched.

The LEDs are bright but as I mentioned earlier, they lack the 'throw' of the conventional halogens, even with the build-in projector lens. Now I strongly do not recommend LEDs for those who need the true function of fog lamps as this DIY upgrade is only recommended for those who view fog lamps as cosmetic only.

To the wallet, this upgrade was under USD15 and despite the slight inconvenience, I would still give this "Xenon White 6000k" 24W LED bulbs from Premium LED Hause (via Ali Express) a gold star.