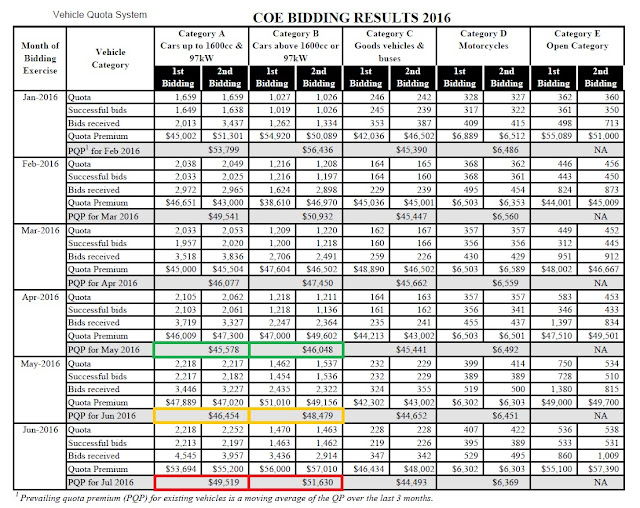 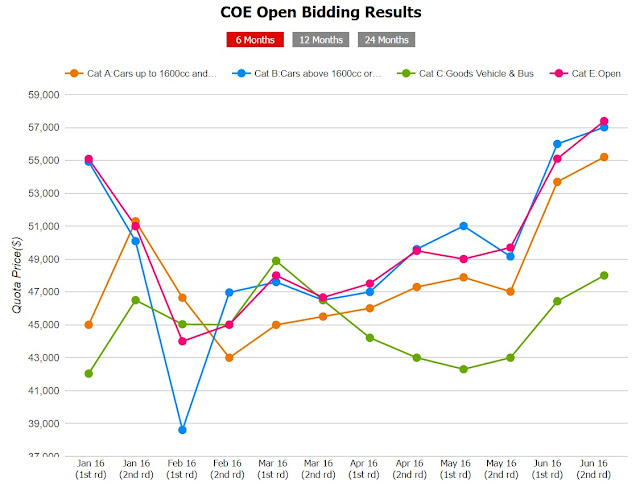 For those of you who read my earlier post,  it was certainly a good call to catch the June 2016 PQP. Like it or not, statistics have been pointing towards an uptrend in prices despite the relatively 'flat' local stock market index over the past 6 months. Fueled by the less stringent car loan policy, there was a decent surge in COE prices.

While the increase in 5 year PQP remains modest at S$1532.50 for Category A and S$1575.50 for Category B, it is still not the end of the world. Nevertheless, the graph above articulates a general trend that the COE prices have been climbing since February 2016 for both categories so if anyone is caught in the 'fix' of COE renewals, you should act fast!

I know a couple of people out there whose cars expire early 2017. Perhaps, they are hoping that the COE and PQP will decrease then. With any luck at all, the COE may remain in the S$50,000 plus region but with the usual corporate year end bonus payouts and festive seasons in December 2016 and Chinese New Year (CNY) in early 2017, I remain rather skeptical that the situation would pan out favorably.

Generally, many buyers would want a new car delivered before the new year and especially, CNY for the local Chinese community. Based on the 2016 data tabulated above, it was obvious that the January 2016 COE was significantly higher compared to February 2016 (particularly Category B) because CNY fell on 8th February. Based on volume, more bids were received vs a lower COE quota in January for the delivery of readily available cars in early February, just in time for CNY 2016.

So if you have a car due in July 2016 to early 2017 and renewing the COE is a consideration, it may be wise to perhaps forfeit the remaining months of your current COE and make a renewal soon. After all, the COE or QP paid in 2006 and 2007 were no more than about S$13,000 so your lost of those remaining months would amount to only hundreds, still justifying some possible savings.

But then again, just as Trump led in every Republican poll in American politics, the world is full of surprises. You'll never know...
Labels: COE Discussion Editor's Thoughts