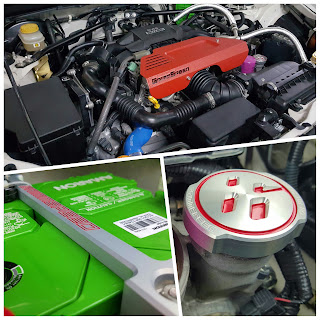 I will not lie but I am a sucker when it comes to engine bay 'blings'. And while some may just be for mere cosmetics, there will always be a few performance enhancers that may be worth the buck.

Alright, so the stock FA20 boxer is a neat and extremely clean but dull looking engine. Because it is a flat-four, so unfortunately, there are no cam covers in sight apart from the plastic intake manifolds. So, the heart of the Toyota 86 is desperately in need of some colour! 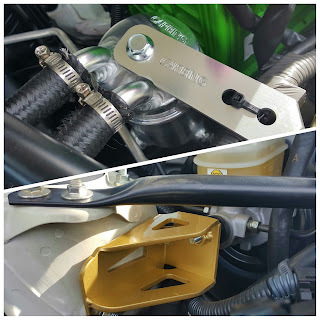 Coming to performance enhancers, I got the oil catch tank from Carbing installed with an upgraded fireproof braided hoses instead of the clear silicon ones that came as stock with the tank. From past experience, those clear hoses get brown and dirty over time from all the engine oil mist, a testimony to why we need an oil catch tank.

Okay so here's a little about the science. If you do not already know, the Positive Crankcase Ventilation (PCV) valve directs the crankcase gases or "blow-by" gases from the crankcase to the lower pressured intake manifold to maintain an equilibrium in the system. While a standard across most engine applications, it doesn't do any good to the life of your engine. Now, the catch tank is there to condensate these oil mists collectively within the tank and allow a slightly cleaner combustible mixture back into your engine. In this regard, cleaner air gets re-circulated instead of the oil filled engine vapours. The result is a cleaner throttle valve and prolonged engine life! So, do yourself a favour and get one if you love your engine.

In its renown 'gold' appearance, the master cylinder stopper from Laile Beatrush. Awesomely built, I had it shipped from Japan through eBay.  Customed for the Toyota 86 and BRZ, the Beatrush bolts onto the side of the engine bay through the wheel fender walls in perfect fitment. Reducing firewall flex from braking, an increase in overall brake pedal feel and reduce in pedal travel can be felt, improving braking response for your everyday drive. Another good upgrade for about S$55 inclusive of shipping. 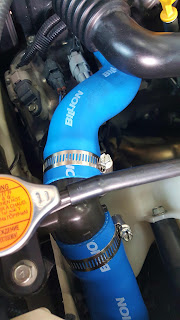 Now what's an engine bay without blue silicon hoses? But to be honest, I was contemplating between Billion and Samco. The Samcos look really good in the gloss blue and it remains one of the better brands in the market.

However, after much thought, I decided to go for Billion as the brand has a real reputation for endurance races across Japan.

While Samco creates strength by multiple overlapping ply of silicon, Billion goes the opposite with a solid ply construction.

Both have been pressure tested so be sure you get your coolant hoses from reputable manufacturers and not some chinese look a like from eBay that may fail when pressured. Good things do not come cheap but if you really wanna head for those knock-offs, I rather you stick with the stock hoses. 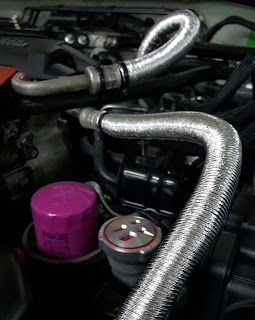 Last but not least, thermal wraps for my air conditioning high pressure and low pressure hoses. Now, one runs cold while the other hot and unfortunately, both hoses are exposed to the heat within the engine bay.

While it is more significant for the colder line to be insulated so it doesn't lose heat (for better thermal efficiency), it doesn't hurt to have them both wrapped.

Here's the trick. You can get them from your garage or accessory store but those sold for cars do not come cheap. The ones I got were for household stove gas tubes. I have been using these in my engines for years and I can assure you, they are about the same stuff. Paper, wrapped with aluminum and that's it.

While some of the automotive ones claim that they are tested to 500 degrees blah... blah... blah... But seriously, if there were a fire in the engine, the hoses we are talking about here are the least of any concern.

So get them from your local hardware store for a few bucks and you will be on your way with tie wraps! Sometimes, it pays to think a little before spending that dollar so you can put your money on stuff that needs paying.