So after all the rumours and speculations, Toyota has finally announced that they will be offering a mid-life upgraded version of the awesome GT86.

Only to the disappointment to many, the facelift version, said to be made available to most shores sometime soon spots no significant improvement apart from cosmetic changes.

The 'geniuses' behind the scenes have decided to replace the front grill, bumper, new LED headlamps, tail lamps and remove the beautiful 86 flat-four piston logo from the fenders because it would make the car faster. Okay I was kidding but like many others out there, it couldn't be more disappointing because the story behind the logo was the highlight of the unique co-development between Subaru and Toyota that brought the flat-four into the world of the 21st century Hachi-Roku!

Then there's the talk of the town that the 86 needed more power because the sweet chassis, although balanced but playful could potentially handle more. While I am not expecting a 400bhp version out from the factory, the marginal 4kW of power and 9Nm of increased torque would not even excite my grandmother. Seriously, this could be easily achieved from a $600 chip tuning module. Wow... what a  jump from the flywheel. 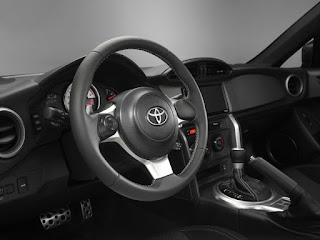 Then comes the interior. I do agree that the current insides of the Toyota are basically plastics and nothing to brag about. I have personally improved the look of the center console of my current GT86 with chrome aluminium CNC machined knobs to add a more expensive 'feel' to the whole dashboard. This effort seems to have put those in charged of the facelift project to shame because the world will see nothing of this sort from the facelift as reported. Again DIY rocks...

While the competition remains stiff among the sports coupes today, it's again a big disappointment that no emphasis had been put into improving the quality of the interior. Take a look at the quality of the new Mazda MX-5 miata and you will have some idea what I mean about good interior.

Then they added some volume controls on a new steering wheel that looks like something from a Toyota Echo. As pictured, the wheel is said to have a new soft-feel 'Grandlux' material.  Is that something found in a push-up bra or what? What in the blue hell does that mean in the racing world? Where's the good old alcantara or carbon fiber folks?

So there you have it. A sloppy update of one of the world's greatest sports coupe with a new dress, new alloy wheels and a "shark fin" antenna to face the competition. It's too bad they didn't throw in another cup holder!

I am not sure what those factory engineers and designers were thinking but they really cut the corners on this one. I guess the clear message is "Go Aftermarket"! With the tonne of aftermarket goodies out there, much can be done to bring out the beast in this beauty.

Only consolation is, for those of you, like me, who bought the earlier versions, we have the last laugh... No regrets, mod on!
Labels: Editor's Thoughts