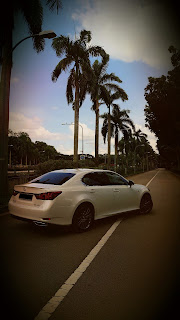 Toyota, one of the largest automotive manufacturers today has come a long way. Headquartered in Toyota, Aichi, Japan they have produced millions of cars since the 1930s. From the legendary AE86 drift machine, the horsepower packed Supra to the luxurious Crown and tiny Prius hybrids, the automotive giant has made it all.

Since the 1980s, Toyota has formulated Lexus, a luxury division of Toyota that took refinement in cars to another level. In recent years, Lexus has incorporated the high performance sports finesse into its range of toys with the F models and also with the more affordable F-Sport range.

Fortunately for me, I received the keys to the GS350 F-Sport while my GT86 was being repainted. So welcome to the GS350, a rear wheeled driven 3.5L V6 sports sedan packed with 316 stallions and over 350Nm of torque. 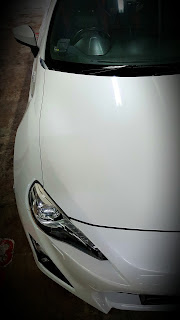 Granted that the Lexus GS is a very different kind of car compared to the Toyota GT86 GTS but that's not going to stop me from telling the tale of the two 'Samurai'. The GT86 is mated with a 2.0L flat-four from Subaru. Integrated with Toyota's advanced fuel injection technology, the boxer produces an impressive 200bhp and just above 200Nm of torque for the light-weighted coupe.

As opinionated as it sounds, Lexus promises much adrenaline from its sports range and having driven both the F models and the F-Sports on the track, I do agree that the company has indeed brought performance closer to the heart. I must say the F and F-Sport models aren't perfect but considering the amount of time they had spent in development, the outcome was pretty impressive.

Now we all know how the media has projected these cars and I am about to ignore all that had been said and write this from the point of view of a JDM fanatic who happens to be a family guy. 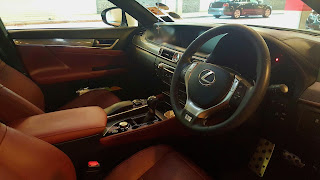 PART 1: The Cabin Within...
For obvious reasons, the Lexus stood out with its high quality leather rich interior all around. There is so much leather in the cabin that we were pretty much 'engulfed' in animal hide. The huge industry's first 12.3 inch high resolution split screen multimedia display with navigation and PS4 like graphics of Sport and Sport+ modes? Simply outstanding. But a touch screen would still have been much more intuitive compared to the 'floating' mouse. Something I found difficult to use. I was not amused... 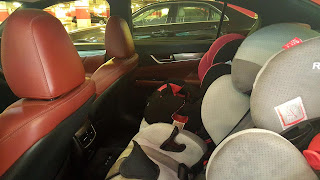 Plentiful legroom made the wife and kids very happy, that spaciousness and luxurious feel brought back memories of my previous 3rd Generation GS300. As expected, cabin noise is exceptionally low but not as silent as the luxury versions because the F-Sport is equipped with an intake sound generator. But I must add that Lexus did a very good job in terms of the sound generation. I thought very much that the 'growl' produced by the intake was certainly music to the ears with such tuned acoustics that articulates a V6 motor very nicely like music from beyond the thickened firewall. Simply wonderful... Not to mention the premium 17 speaker Mark Levinson audio system with those brushed aluminum knobs! High fidelity on the go that audiophiles would appreciate. 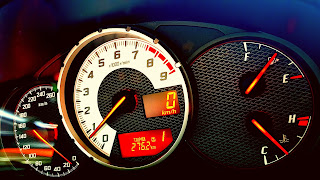 Whereas the leather rich interior of the Lexus out-shined the more plastic Toyota GT86, the latter was all about the absolute one thing. Racecar! As a consolation, the GTS variant came with red stitched black 'leather' interior, synthetic leather in my honest opinion. Sure enough, the steering has European stitching all around but it's disappointing to know that it isn't leather wrap. Nothing truly fancy but still presentable.

With an almost perfect seating position, the GT86 felt like a driver's car and the cabin ergonomics was no exception. Yes, everything and I mean everything was within reach of the driver and the cabin just makes you feel like it was built for the track. Equipped in the GTS high grade model is a white tachometer with digital speedometer and a built-in shift lamp to compliment those peddle shifts! Configurable to your liking, an option is available to set the shift lamp rev limits and beeper. How racecar like is that! 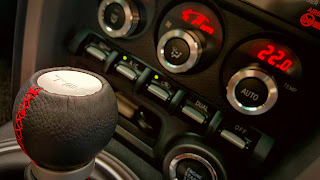 There were no fancy navigation LCD screens as stock options from the local authorised dealer but you could always go for aftermarket upgrades.  Here, we have a 7 inch Alpine ICS-X8 head unit with a 50W per channel amplifier driving a pair of German made Rainbow component speakers for the front. Not exactly Mark Levinson quality but decent enough for the road. Unfortunately, your efforts to listen to your favourite radio station and low volume would prove to be futile because like a racecar, the cabin insulation had been kept to a minimum by Toyota/Subaru for the sake of saving weight and the road noise can be quite unbearable at times. The GT86 is indeed a very noisy car so you can forget about having decent conversations during your drives with your passengers.

You would be glad to know that the Toyota had been equipped with a sound generator too. But it sounded nothing like the one in the Lexus. In fact, it sounded so artificial that I had it plugged to omit the intake noise completely because it didn't do much justice for the FA20 boxer. Toyota certainly cut the corners on that one. Definitely a disappointment. 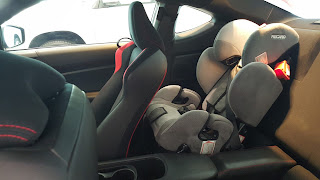 Being a typical 2+2 coupe, the GT86 qualifies as a family sports car. There isn't much space at the rear to be honest but it would do for kids. Thus far, my kids aren't complaining and I take it as they are happy back there. I hope...

There is no center arm rest like the Lexus and that means that you have to really manage your storage in the GT86. The glove box is as tiny as a waist pouch so having some CDs of greatest hits would already have occupied the limited real estate. One only thing the Lexus and the Toyota had in common was a missing little bin in the front. Granted that the GS350 had ashtrays at the rear doors for passengers but that's no good to the driver. Seriously, would you want to smoke in a car like that? 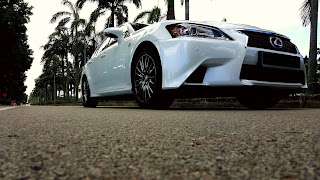 PART 2: Super Street...
Both these cars were exciting on the street in its own right. The GS350 strides with the mighty V6 and eloquently reminds us that the greatness of volumetric capacity was no myth. At approximately 1765kg, the Lexus is far from being classified as feather weight. At lower speeds, the car feels weighty and you are consistently reminded that you are plus sized because of the huge leathered cabin. Nevertheless, the 316bhp power plant is certainly no slouch in bed even in economy mode. Put the pedal to the metal and the the Lexus launches forward with a "Ho-Lee" shit surge over the 4500 rev mark and effortlessly pulls all the way to the redline. In a about 6 seconds, you would have broken the legal speed limit on all urban roads. Put it to Sport+ mode and the throttle sensitivity increases together with some aggression in transmission.


On the highway, the GS cruises brilliantly. Comfortable and relatively silent, the Japanese luxury machine proved to be ideal for the suit and tie executive. For most part of the drive, the ride felt confident but it was when we hit some uneven road surface that the suspension rocked a little from side to side. Put it in Sport mode and the dampers stiffened, that made the ride slightly more stable but the side to side motion was never eliminated.

As a sedan, the steering couldn't be lighter and like just about any other Lexus, there is a very 'electronic' feel to the wheel. Somehow, they never seem to have gotten it very right. Perhaps some wider slicks would provide a little more feedback to the steering. On the hindsight, the electrically assisted steering was great around the parking lot and shines at parking. With the rear assisted steering, the turning radius for the Lexus was really impressive for a car of its size. U-turns were a walk in the park and the car felt very agile for its size. In fact, the turning radius felt better than the Toyota GT86! 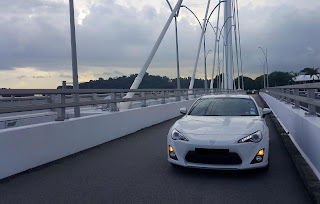 But when it boils down to the driving experience, the GT86 is better! For sure, the Toyota is nothing but one of the noisiest cars on the planet. Road noise from the tyres were more than audible and every pebble or grain of sand could be felt at the steering wheel. The coupe is loud and 'raw' with a true "Man & Machine" interface  that let's you 'read' the road so well. Which is exactly why I like the GT86!

Obviously, Toyota certainly knew how to make a proper sports car because the GT86 is that very testimony. There is nothing to marvel over refinement but the FA20 boxer spots Toyota's advanced fuel injection technology (and it was quite easy to pick up how astonishingly responsive the engine is. Coupled with the highly accurate steering and its mere 1280kg mass, it's almost impossible to not love the agility of this car. With the enjoyment of every twist and turn instantly becoming a favourite past time, I never felt more in control and assured, especially with the 255/35 rear slicks gripping the ground with such adhesion. Exit a corner hard and you could almost hear the Torsen LSD working, trusting you out of every corner when you work the throttle. On the straights, the FA20 was no match for the 2GR-FSE V6 in the Lexus but the overall balance and precised steering of the Toyota tells you that power isn't everything. Apart from the slightly sluggish 1st gear, the GT86 launches you forward aggressively in 2nd and the car starts to swallow tarmac relatively quickly with speeds in excess of 100km/h.

Slow? The GT86 is definitely not, but neither is it quick...

For a stock set-up, the suspension is rather stiff and the car bounces a fair bit over little bums and uneven surfaces. When pushed hard around corners at higher speeds, the stock coilovers will be challenged and overall confidence will very much depend on your tyres. While the overall body roll is minimal and the chassis impressively rigid, the GT86 would definitely benefit from better aftermarket suspensions. 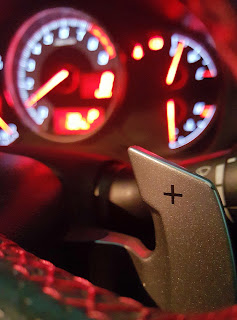 To my surprise, the 6-speed automatic in the GT86 shifted faster than that of the GS350. With a claimed shift time of 0.2s, the auto transmission isn't exactly DSG material but does the job more responsively regardless whether you are up or down-shifting. Some reports have claimed that the transmission is a tweaked Lexus 6-speed IS250 gearbox with an IS F inspired software for the quick-shifts. While I really cannot validate those claims, my experience tells me it's kind of like the 6-speed version of the IS F's 8-speed.

So here's the hard truth. If you are in your twenties, buy the GT86 because you will certainly not regret this "chick magnet". When you hit your thirties (like me), you better buy it before it's too late. Any older and you will have difficulties getting in and out of that coupe. If you are in your forties and play lots of golf, take the GS350 F-Sport because none of your friends will ever consent to a Toyota. Beyond that, the Lexus would be wise because it would be insane to commute in the GT86.

I suppose every adrenaline junkie would be compelled to tell you that once you have driven the GT86, driving will never be the same ever again. Right now, I am even more glad that I own one because vectoring the GT86 against the more expensive GS350 F-Sport and for that matter even the RC F, the coupe from Toyota is simply brilliant!
Labels: Drives Diary Editor's Thoughts