How To Remove Water Spot Stains On Windshield 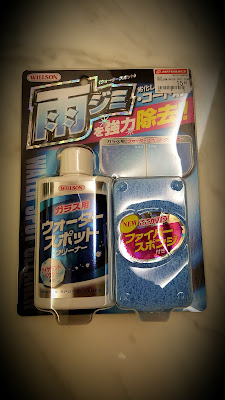 The truth is that one of the most annoying issues to a car enthusiast is a water stained windshield. One may always be focused on the shine from paintwork but a neglected condition of windows, windshields or moon-roof would be a catastrophic failure in the eyes of car detailing.

For obvious reasons, the removal of hard water stains on glass surfaces isn't quite as easy as it sounds. If you Google it, there are many out there with 'successful' claims with the aid of white vinegar and whatever else from the household kitchen. Believe me, that's nothing but a myth.

When I took over my GT86, the windshields and windows were badly spotted with hard water stains. In fact, the rear windshield was so bad that it looked like my ride was suffering from some sort of skin disease. Regular washing and even claying proved to be futile.

If you read my older self help article, a good wash with dishwashing liquid and a steel wool was a good way to keep your windshield smooth and grime free. Doing just that would always be a good first step. In this context, the steel wool did get rid of some of the larger and more obvious hard water stains but the adversary was still present; but in less obvious amounts.

Now, I do not read Japanese but I gave this water stain remover from Willson a go out of desperation. I mean, it was merely S$15 and even if it was a hoax, I wouldn't have given a rat's ass about the financial loss. Moving on, the so called instructions at the rear were all in Japanese with the "nano technology" looking pictorials in the rear of the package. For what it's worth, I kept my faith strong in Japanese inventions.

So this cleaner comes with an applicator with 2 distinguished surfaces, a smoother sponge like face with a coarser texture on the other side. The milky white solution from the bottle seemed like a compound based polish and when applied evenly with the applicator, it felt rather abrasive. I applied a decent amount of the cleaner in a circular motion for my entire rear windshield, taking some care not to hit the rubber seals around the edges. Once dried after 5 minutes, I had the glass surface buffed with a microfiber cloth to remove the cleaner.

The verdict? Those hard water spots disappeared like magic!  Re-applying and repeating the motion on certain stubborn areas and after some 30 minutes and some perspiration, I had my windshield and windows restored like new. No frills and bullshit but this stuff works really well. For S$15, I had no regrets and this comes highly recommended.