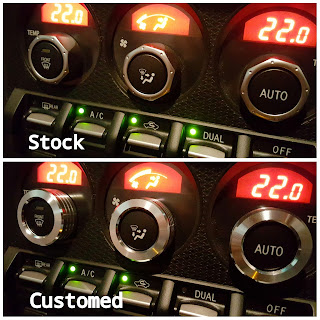 Although I love the interior of the Toyota 86 for its race car qualities and ergonomics, one must admit that the interior materials can be rather 'plastic' and 'dated' compared to what you find in a more expensive, higher quality German rivals.

While the soft dash is credible, the interior lacks LCD displays and for heaven's sake, Toyota should have just given us more chromes! I'm talking real hefty manly chrome knobs like those found on high-end audio amplifiers and not some plastic makeshifts.

Perhaps cost was a factor and the 'purist' approach towards producing a light weight sports car has always been the excuse across all manufacturers to avoid heavier materials and 'blings'. Granted the school of thought for the sake of laptimes but that never worked for me because I will not be racing on the track 99.9% of the time and the added grams of weight for some aesthetics would be warmly welcomed. 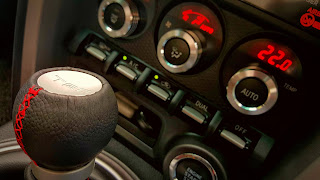 In the pursuit of cabin happiness, I bought three CNC machined alloy A/C knobs and a TRD gear knob for my center console from the seriously 'poisonous' Taopao.com website, the so called Chinese "Amazon" if you will. Alright, my mandarin sucks and the entire site was in Chinese. I obviously couldn't read much despite being Asian so I got a friend (my web shopping partner in crime and now taopao 'dealer') to do the buying on my behalf.

While I am not entirely certain if the TRD gear knob was genuine (because it costs only S$8), I honestly couldn't tell it apart from the ones I saw at the local dealership that costs over twenty times more. Yep, you heard me, twenty times! All I can say was it came in a white TRD box (although not in the best shape from the shipping) that printed "Made in Japan" just like the ones sold at the dealers and it came wrapped in genuine leather. Okay, so I did put it to my nose and it distinctively smelled like leather. That was as far as I went for calf leather validating, no tongue...

Anyway, the CNC A/C knobs were really cool and costs about S$15 per piece. No adhesive or yanking of stock knobs needed for they were machined with relatively tight tolerances and snapped right onto the original plastic knobs. Take a look at the difference and you will agree that it was worth every penny.

Complimented by the genuine leather TRD gear knob, my center console now looks much more luxurious with a touch of 'German' flair and stylishness. Not exactly Lexus LFA material but with the new chrome trimmings, I would pass it off somewhat like a 2010 Audi TT.

So the end result of my S$53 investment was a more glorified, sportier interior. Look forward to seeing what some leather and alcantara wraps will do to the cabin but as of now, I'm just loving the upgrades!
Labels: DIY Editor's Thoughts Hachi-Roku (ハチロク)