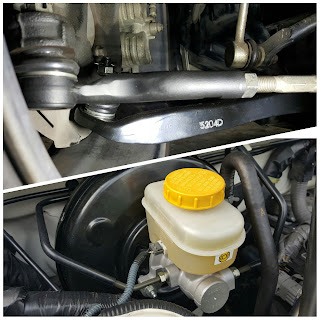 Correcting inconsistent steering pulls can be rather challenging as the fault tree can be rather large. Spanning from simple improper camber settings to more complex components such as suspensions. The list goes on...

When I bought my used GT86, one of the issues I noticed was the car pulling right abruptly when I was negotiating a right corner. This only occurs at speeds in excess of 70km/h when turning right. Believe me, that was really unsafe.

Wheel alignments that were done only proved to be futile; and because this only happens on turning right above a certain speed, it certainly sucked as the beautiful 86 was put down by this one major problem that will compromise safety.

Refusing to live with this issue, I got the car sent in for warranty repairs after I managed to convinced the vehicle assessor that there was something wrong with the car. Not to mention, I had hard 'knocking' sounds on the bottom left of the car whenever I drove on uneven ground or when I stuck a speed bum on the left wheel. If that wasn't bad enough, these major issues were also accompanied by a 'squeaking' brake booster pump.

Thankfully, the local dealers made an assessment and concluded that the following needed replacement.

Although the bushings and ball joints looked normal on the outside, I supposed they were worn internally. I suspect that the 86 could have been previously lowered and now that she has been returned to stock condition, the wear rate of the bushings and ball joints at the previous camber and suspension geometry could have been uneven. Perhaps while turning right, the ball joints of the tie rod would 'slip' into an uneven wear region, causing an abrupt and sudden steering pull and higher speeds even when a constant steering angle was maintained.
After some 3 weeks of waiting, the parts arrived from Japan and were replaced, fulfilling the warranty terms. Thankfully, I got this done when I was on vacation in Osaka so I suffered no down time.

Today, my GT86 rides as good as new with the new parts. The 86 now drives engagingly with no more steering pulls. However, the newly replaced brake booster didn't seem to be all that quiet too and I can't help but to think that the stock brake boosters were no where near quiet to begin with.

Nevertheless, I was really thankful that the critical issues had been resolved.