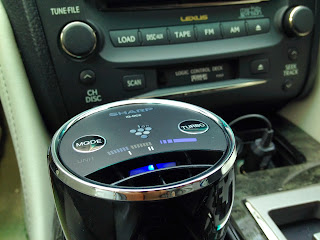 It was a typical lazy Thursday afternoon and I made a stop at the electrical store because a good friend of mine was interested in some of Sharp's air purifiers.

As he was getting his mind sorted out with the salesman, I found myself looking at a product that looked exactly like a coffee cup from Starbucks. To be honest, it was not the first time I have seen it but I never bothered to find out what it was. I'd always thought that it was something for the desk. You know, one of those water filter things?

A closer inspection and it turned out that this little "coffee cup" was indeed a plasmacluster ionizer for the car! So out of boredom, I amused myself with the technological article and took the plasmacluster apart to figure out what went where. By the time the salesman returned, my confusions were cleared up after my little science exploration. An Ion generator, a little blower and a 12V supply was all that was needed. Plus S$159 of course (It was on sale with S$40 knocked off the tag for the black). It was unfortunate that there was no working display model for I was a touch concern of how it would fair in terms of noise.

The next day, I unpacked it as excited as a little boy on Christmas and I took it for a spin for the very first time. There are 3 speeds, low, medium and when you hit the turbo button, the little 'snail' blower does its job at full spool and you should expect a fair bit of noise on that. At low, the plasmacluster seemed relatively quiet but still audible in the Lexus. So much so that my wife wasn't impressed and it was forbidden to be turned on when she was in the passenger seat. (Just so you know, she has bionic ears!) If you don't, I assure you, it's fine.

But I can tell you honestly, you can really smell the ions when you put the plasmacluster to your nose!

I am not going to bore you with the technology but I do feel it works to a certain extent when it comes to the elimination of smell. Having take-outs are pretty common for the average Joe so with the plasmacluster, the after smell and other allergens from the air didn't seem as overwhelming as before.

Although a touch on the pricey side, the engineering bones in my body tell me that a stand alone unit would work better than the built-in ionizer function in my Lexus.

Nicely packaged, this "coffee cup" concept is certainly food for thought for the health benefits it offers.

Oh...and if you are a true caffeine person,  you'll lose a space for your cup of coffee.
Labels: Editor's Thoughts Sharp Plasmacluster