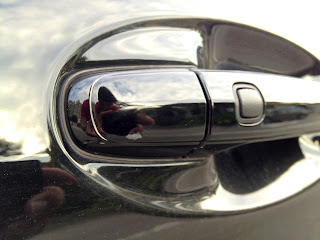 Having yet another nick on my door certainly pissed me off, especially when it was deliberately done by drivers or passengers from a neighbouring car that had extremely no regard for the property of others.
Perhaps it was just my luck but a nice day at the park turned out to have cost me that nick on my door handle. Unfortunately, this was quite expected as the sucker who left me with the damage didn't even bother to park straight. I just knew that something was wrong when I returned. Obviously, this wasn't my first time but I have had it putting up with these idiots. These people should be caught and put to sleep!
Just to add, the horribly parked Toyota Vios was covered with scratches, dents and a damaged bumper that was not even repaired. The paintwork was so bad and that reflected much of the owner.

Although we have the most expensive cars in the world in Singapore, some owners just do not care. They drive around with terribly maintained cars that have not been washed for ages. To me, the condition of a car summarises the character of a person. While I do not give a rat's ass of what you make out of your own lives but such an irresponsible and selfish act would someday result to retribution.

Frankly, I felt like returning the favour but that would only put me in the same category as that bastard.