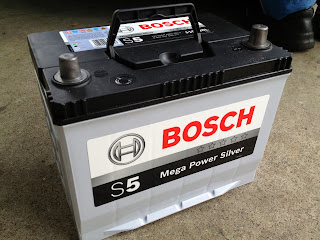 I have always lived around the belief that a good battery would last about 2 years. Well, at least for my Corolla, that was relatively accurate.

Who would have guessed that as I was about to set off for supper late last night, I had issues starting my Lexus.

Checking back on my records, the last battery replacement was done on the 12th May 2012, slightly over a year ago. I picked up the phone and called the trusty Lexus roadside assistance at 2am (just for kicks to wake the guy up) and I was quoted S$326 for the Bosch S5.

To me that was madness, over S$300 for a battery was just too much to pay for. So, in order to save some cash, I skipped supper and got my battery replaced at a nearby tire and battery shop this afternoon. That same faithful Bosch S5 cost me just S$200.

According to the battery guy, Bosch was the only battery he recommended for my Lexus. Although I had been a faithful customer of Amaron batteries in the past, I trusted him on this one because the Bosch was rated at 93Ah and according to his experience, nothing out there produced the same 'punch' as the S5.

Not sure if my mileage was somewhat related to my battery life but I had really shitty mileage for my last 3 pumps. Perhaps the alternator had to work much harder to supply power to the car. No other theories in mind but we'll see if the mileage improves from here.

Push the start button and my V6 fired up almost instantaneously. What a relief...
Labels: Editor's Thoughts Project Gryphon