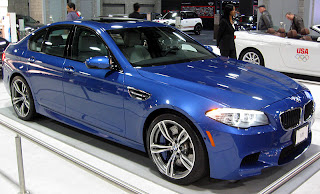 I was on my way onto the freeway followed by a modified EG6 Civic one morning. As I filtered to join the freeway, I could here the VTEC of the Civic screaming away as it made an attempt to pass me.

Suddenly, out of nowhere came this monstrous M5 that effortlessly overtook the Civic and launched itself into the traffic, displaying the brute 560 horsepower that was produced by its 4.4L twin turbo V8.

Obviously, the VTEC must have really pissed the M5 off really bad as it seemed that the driver in that German monster wanted to prove a point. Although I did not participate in the duel (my V6 wouldn't stand a chance anyway...), the speed and acceleration of the M5 was simply amazing. Although it did not 'scream' like the VTEC, its presence was heard by the guttural sound of the V8 power plant. Immensely scary, the M5 manoeuvred through the traffic at such intense and precise agility that left me speechless.