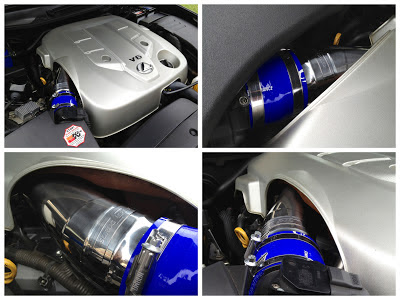 By the time you read this, I would already have enjoyed three days of joy with the Suruga Speed Air Control Chamber under the hood. And for that matter, no complaints from the good wife! As much as we car enthusiast love tweaking our rides, our beloved other half is usually left to tolerate with our obsession. As she is more familiar with items of the kitchen such as kettles, stoves and blenders, she never really understood why money was spent on this metal piping that she will never get to see, ever...

Quite simply put, the specifications set by my wife are pretty simple, nothing too loud and nothing non-compliant with the regulations set by the authorities. Understandably, she doesn't want to be pulled over by the cops. Having said that, we love our wives and our cars so a compromise goes without saying.

Enough said, let's get back to business.

If you have been following my previous article, I touched on some pointers why I chose the stock air box option with a high flow K&N drop in filter over open pod options. Certainly, one of the key reasons was to keep the sound level down but decibels aside, the K&N has worked really well for me, particularly in the aspect of fuel consumption. So, in theory, the combination of the K&N and Suruga would help in the reduction of intake pressure drops and promote better airflow and intake volumetric efficiency.

Thus far, the drive has been absolutely enjoyable as the V6 'Growl' is audible but in a very glorified manner. In general, the drive under 4000 revs sound almost identical to stock and the change is not noticeable. This retains the comfortable cruising characteristics of the Lexus which is certainly a daily joy. Pass 3700 revs and the glorified growl comes in all the way to the redline. Do not get me wrong for this 'Growl' is not like what you would get with an open pod filter, it is very similar to that of the F Sport intake variation but only more muffled, thanks to the resonator delete. I suppose a slight modification to the air box is needed to achieve a louder effect but I am not keen to explore that option as yet because an additional opening at the air box would also induce warmer air into the intake if not executed well.

In the department of performance, I did notice a slightly better pull at the mid-upper power band, particularly at 3500-4000 revs while throttle response seemed a touch more responsive throughout the rev range. Obviously, this could also be due to the fact that the throttle body was cleaned during my installation. Nevertheless, everything achieved resulted from the combination of the entire intake system and not just the Suruga as an individual component. For certain, there was no loss at the low end as torque is still available at low engine speeds.

I will be monitoring the effect on fuel consumption but from what I know, the expected changes should be minimal.