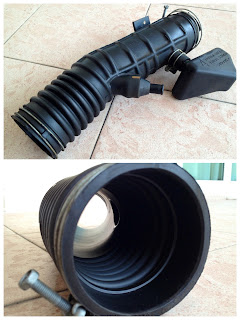 As the entire intake assembly was to be dismantled, I seized the opportunity to clean up the throttle body concurrently. Thus, I purchased a bottle of OWS manifold cleaner and worked on cleaning the throttle body prior to replacing the intake.

This was a little labour intensive as it  required the removal of the e-throttle body assembly from the intake manifold because the brass butterfly valve did open upon pedal depression, not even when the ignition was on. 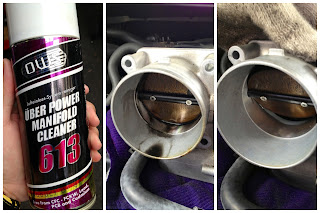 The Mass Airflow Sensor (MAF) sensor was also checked and cleaned but I personally felt that the manifold cleaner used for the throttle body was a touch too strong for the delicate MAF. Therefore, a conventional contact cleaner spray (often used for electronics and mechanical contacts) was used.

After all the necessary cleaning was completed, the intake was installed. With the usual fitment of the silicon hoses and the hose bands, the entire assembly was bolted onto the throttle body and the air box in just a couple of minutes. 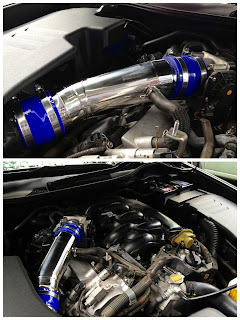 Following the complete installation of the Suruga intake piping, I fired up the engine. The engine idle was significantly higher than usual and based on my past experiences, an erratic engine idle speed is expected for the next day or two because the Engine Control Unit (ECU) and the MAF sensor would attempt to re-calibrate from its baseline after all the electrical disconnections and physical cleaning.

This seemed perfectly normal but should the idling speed get way too erratic, I would have to disconnect the negative terminal of the car battery to reset the entire engine management system to a zero point for self calibration. The only downside resulting from such a remedy is that all audio settings and perhaps your clock will be reset and you'll have to tune it all over again. Not a huge price to pay but the inconvenience can be troublesome.

So after some minor cleaning of the engine bay, I was happy with the Suruga Air Control Chamber as the added stainless steel "Bling" to the engine bay was certainly a real awesome sight. At idle and without the transmission being engaged, there seemed to be no audible difference in the induction.

Excellent! My wife would not even notice a thing...
Labels: Project Gryphon