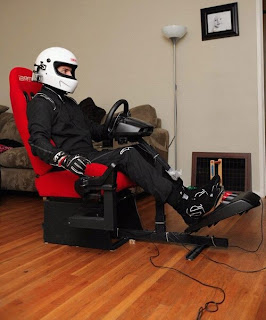 While I know that the Gran Turismo 5 and whatever else that's available for XBox 360 or Playstation can be mind blowing entertainment, some gamers are really taking this up the next level.

I got this picture from Facebook via 7Tunes and this gamer is seriously hardcore. I mean, just look at his set-up! Apart from the bucket seat, pedals and steering wheel (that is expected in my opinion), this guy is more or less dressed like the 'Stig'! (only in black....)

He's got a Simpson racing helmet and an attached GoPro camera? What in the blue hell was that for? I thought that games had replays so I guess this dude either did it for the publicity, has a real race car for the track (hence the helmet and GoPro) or he just has plenty of 'dough'.

Nevertheless, it's one hell of a cool set-up that could probably cost more than it would putting a turbo in a real ride. My wife would probably think I'm nuts and have me sent me away for medical help if she saw me doing this.

Off the record, this would be a great Christmas gift!