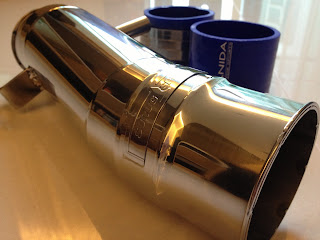 Finally, after almost 2 weeks of anxious waiting, my Suruga Speed Air Control Chamber has arrived from the land of the rising sun. I really do not know why it is called the Air Control Chamber but I suppose the company wanted it to sound more "Engineered" for the price tag. Priced at ¥49,350 before shipping, the Suruga sure doesn't come cheap and this is by far the most expensive intake I have ever purchased.

I must admit that there aren't many intakes available for the 3rd Generation 3.0L V6 GS300 (S190) especially if you want to retain the stock air box. Most aftermarket intakes available are mostly made for the larger 3.5L sibling found in the GS350 for North America and other parts of the world. HKS used to make them but that model has since been discontinued. Although I could still purchase the HKS intake online from several stores in the United States, I chose the Suruga for a number of reasons. 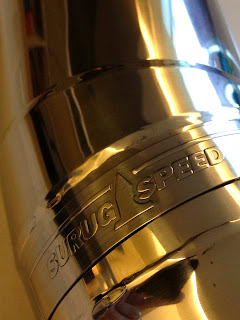 First of all, you would like to know that the Suruga is made from SUS304 stainless steel and not aluminium. Technically speaking, the former is heavier than the aluminium variations like the one from HKS but when it comes to the 'Bling', polished stainless steel kicks ass! Somehow, the chrome has a slightly darker 'Tint' to it and the overall looks is simply stunning. So I figured that an added pound or two wouldn't kill. (For those of you who are in the department of weight reduction, I believe losing a few extra pounds off your own body weight would do more justice). One other point to note is that stainless steel is less prone to oxidation and scratches compared to aluminium. Hence, its shine should last a little longer. If all this doesn't convince you then what's left is bragging rights. Yes, that baby is made from stainless steel and it ain't cheap.

Also, the Suruga Air Control Chamber has a slightly larger internal diameter as compared to the HKS intake and for that matter, even the Lexus F-Sport intakes for the IS250/350. This means that the volumetric efficiency in the delivery of air will not be compromised. Perhaps Suruga engineered this to compensate for the volume of the resonator unit found in the stock intake? I'm just guessing. Nevertheless, I see no disadvantages in a slightly wider intake unit.

The build quality of the Suruga is fantastic, the welds are neat and the logo offset beautifully to the side. The intake comes with two 3 ply silicon hoses (Samco blue) and some hose bands to secure the latter to the throttle body and the air box respectively. The internals are more or less smooth (but not polished) to reduce pressure drops within the intake. In engineering terms, this promotes better airflow (from eliminating the bellows from the stock rubber intake) and should improve throttle response. 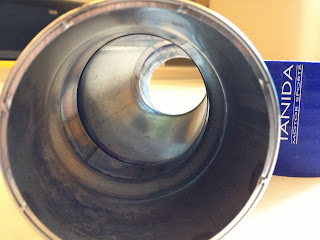 If you must know, there is this debate amongst car enthusiasts about the heat soaking properties of aluminium and stainless steel; which material heats up faster/dissipates heat better than the other etc. On the contary to what is often discussed online, given the speed of the air flow, propergating shock waves and the volumetric efficiency of air on demand at Wide-Open Throttle (WOT), I can assure you that the heat soak effect is negligible! In any case, if heat soak is your primary concern and if you feel that the heat from such a short length would cripple a couple of ponies from your engine then go plastic. Sounds like I'm kidding? No, it's true... Perhaps carbon fibre could be a more expensive aesthetic solution.

Last but not least, no matter what aftermarket intake you choose, they mostly do with the stock resonator delete so you can expect to achieve a sportier note from your engine, particularly from the mid to higher power band. How exciting!
Labels: Editor's Thoughts Project Gryphon Suruga Speed Air Control Chamber