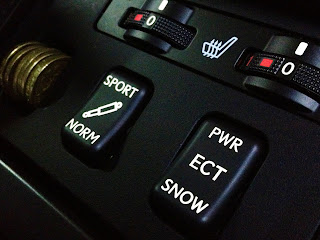 Driving a Lexus has always been a real joy as the refined and quiet cabin coupled with the Mark Levinson sound system certainly makes cruising seem like you're on cloud nine.
But apart from the usual incorporated comforts of refinement, having the 'Sports' and 'ECT Power' buttons by the sides are like an option to use a steak knife on butter.
I know it's a sin to destroy the environment but at times, I just can't help but activating these buttons, particularly the 'ECT Power'. Although this is not the 'M' button found in the M3, it does enough to assure you that you have 310Nm of torque in your hands.
Setting the suspension to 'Sports' firms up the ride (thanks to the Adaptive Variable Suspension (AVS)) while the 'ECT Power' triggers a more aggressive throttle response and alters the shift points of the transmission. I kid you not but combining this dissociative character with the 'growl' produced by the Suruga intake triggers my body to produce much dopamine for an adrenaline rush. Things get more exciting as you hear the V6 hitting the redline on every shift as the car consumes the tarmac much quicker than usual.
Then, it starts to get scary after you have exceeded the legal speed limit significantly enough to realise that you still want to keep your driver's license.
Since I don't have the wedge to buy the LFA I really want, I can only latch onto the fact that I could still get some thrills with a 0-60mph time of about 7 seconds.
I figured that it's about half the fun of a LFA (mathematically) for a fraction of the cost.
Maybe not...
Labels: Drives Diary