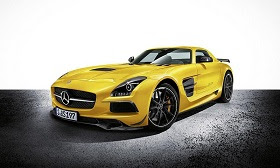 Sporting a series of aerodynamic and mechanical developments brought over from the SLS AMG GT3 race car, this is the fifth in a series of limited-production Black Series models, following from the high-priced SLK55, CLK55, SL65 and C63 AMG coupe.

As tradition dictates, the SLS AMG Black Series is outwardly distinguished by a series of aerodynamic and bodywork changes that provide a distinctly brawnier appearance than the standard SLS AMG — in keeping with its race-bred lineage.

Exterior elements include a deeper front spoiler with carbon-fiber splitter, carbon-fiber winglets to aid airflow to the front brakes and a carbon-fiber hood with a large central duct for improved engine cooling. The front wings are extended by half an inch and rear wings are stretched by 1.1 inches, necessitated by the car's widened tracks and larger wheels and tires, wider sills with carbon-fiber inserts and a significantly larger carbon-fiber rear diffuser.

In a nod to its increased performance potential, AMG's latest model will also come with an optional aerodynamic package that sees additional winglets attached to the outer corners of the front bumper as well as a prominent rear wing attached to the boot lid in place of the standard retractable arrangement.

Along with more purposeful styling, the Black Series adopts a number of weight-saving measures shared with the SLS AMG electric drive revealed at the Paris motor show. The Black Series also uses a carbon-fiber rear bulkhead and center tunnel, which cut about 154 pounds from the standard issue's 3,417-pound weight.

The heart of Stuttgart's latest supercar is a heavily tuned version of AMG's M159-designated 6.2-liter engine. Though horsepower is up, torque drops lightly to 468 pound-feet at 5,500 rpm. Maximum horsepower is available at 7,400 rpm and the engine revs to a soaring 8,000 rpm. That makes for 39 horsepower more than the SLS in standard trim (583 horsepower).

Further engine changes center on the exhaust system — which switches from steel to titanium construction — reduces back pressure and weight, adding an even more striking exhaust note.

Despite the wholesale upgrade, the SLS Black Series is not the most powerful version of Mercedes-Benz's reborn gullwing coupe. That distinction goes to the SLS AMG electric drive, whose quartet of electric motors provides combined outputs of around 740 horsepower and 738 lb-ft torque.

Together with its added reserves, the modified engine in the Black Series possesses a greater ability to rev; peak power is developed higher in the range, maximum torque is delivered higher and the ignition cutout is raised from 7,200 rpm on the standard unit to 8,000 rpm—the highest of any existing road-going AMG model.

Channeling drive to the rear wheels is a modified six-speed double-clutch transaxle. The Getrag-produced unit, which forms part of the rear-axle assembly, has been extensively reworked with a mounting system that sits it 0.4 inch lower than on the standard SLS AMG as part of efforts to lower the car's overall center of gravity, revised software that is claimed to provide faster and more aggressive downshifts and a lower final drive for improved acceleration in combination with the increased torque loading.

Additional driveline developments include the adoption of an electronically controlled differential lock in place of the existing mechanical arrangement. The system is claimed to provide faster lockup intervention, improved traction and increased yaw rate for added agility. The three-stage electronic stability program and race-start system have also been recalibrated in line with the car's increased performance.

AMG claims the SLS Black Series accelerates to 60 mph in 3.5 seconds and reaches a top speed of 196 mph. The marginal reduction in top speed over its less-powerful siblings is a reflection of the new car's added downforce.

Underpinning the new car is a heavily revised chassis boasting tracks that have increased by 0.8 inch in width up front and 0.9 at the rear, new wheel carriers and a larger diameter front roll bar. The double-wishbone suspension is also heavily revised and is described as being 50 percent firmer up front and 42 percent firmer at the rear than the standard SLS AMG, and it also offers manual adjustment of the damping for individual tuning.

The first customer deliveries of the SLS AMG Black Series are planned to get underway in June 2013.