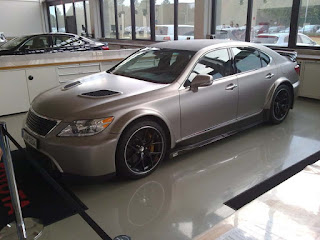 Apparently, sources indicate that TMG is developing a performance LS to combat the Mercedes AMG series with a rumored 650bhp 5.0L turbocharged V-motor that has clocked a sprint time of 4.2 secs and a top speed excessive of 300km/h.

As ridiculous as it seems, the prototype seriously looks like an LS that was turned into a bad ass by a 17 year old school boy. While I am seriously unsure if this was a deliberate attempt to 'mask' the entire development (because they usually do for models running the Nürburgring), I thought TMG could have done better. Well, for a start, the car should have been matte black and not champagne.

Nevertheless, the video on youtube does bring out some impressive exhaust notes to begin with. I guess we will just have to wait and see. Lexus has just launched the 2013 LS range so lets hope whatever that was under the hood would be found in the future LS-F.