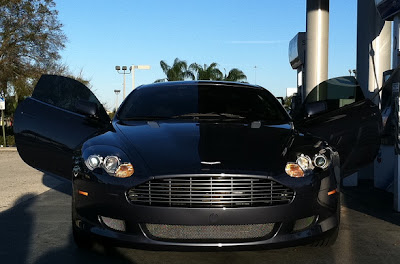 While I can't emphasise any more how much the ozone layer is dying on us, it is obvious that the intense heat makes us rather uncomfortable. Especially, during long drives or when you are just stuck in traffic because some idiot decides to knock into someone and congest the entire freeway.

Inevitably, to the mass majority that are at the mercy of society, this unfortunately is an everyday affair. Thankfully, from the minds of brilliant scientists and engineers came the tinted window films, a product that keeps most harmful rays out while letting in visible light. Or doesn't it?

I'm not exactly sure what the specifications of the local regulations are but if you look at what some have done to their Volkswagens, Bimmers and the Audis these days, the cars look like they had their windows painted black!

Why in the name of God would someone do that? Can they even see through that degree of opacity in the night? Are vampires and demons really amongst us in the 21st century? (If so, Dracula must certainly love cars...) Or has skin cancer been eating the majority of us alive?

Or could it be that everyone thinks that they are pop stars these days and that living a normal life is just really impossible? Perhaps if you were a ridiculously bad driver, no one can really see you so the given middle finger would simply be futile. Hmm.... that sounds about right.

Whatever the reason, it does add some cool factor to the way the car looks (I must admit, they do look really cool). Fingers crossed, I certainly hope this doesn't contribute to more road accidents. And if you are one of those who believe that darker windows reject more harmful rays, I can assure you not...
Labels: Editor's Thoughts